Carrers In The Irish Defence Forces

CAREERS IN THE IRISH DEFENCE FORCES
The Irish Defence Forces is the military of Ireland. We encompass the Army, the Naval Service, the Air Corps and the Reserve Defence Forces.

The Army is a standing force and provides the primary capabilities for joint military operations at home and combined military Peace Support Operations abroad.

The Naval Service is the State's principal seagoing agency with a general responsibility to meet contingent and actual maritime defence requirements. It is tasked with a variety of defence and other roles.

The role of the Air Corps under the Defence Act is to contribute to the security of the State by providing for the Military Air Defence of its airspace.

Defence Forces personnel lead a "Life less Ordinary". No two days are the same in the lives of our personnel. All aspects of military life are varied and for each member of the Force each day may bring a new challenge.

WHO WE LOOK FOR?

General Service Recruitment
The Irish Defence Forces are looking for motivated, physically fit, team orientated individuals to enlist as General Service Recruits. As a recruit, you will train to become an infantry soldier. On completion of the initial training program, successful recruits are promoted to the rank of Private 2*. Following a second period of basic training, applicants are promoted to the rank of Private 3*. Applicants should have:

On qualification recruits take up a position as a three star private in one of the following Service Corps — Infantry, Artillery, Cavalry, Supply & Transport or Communications Information Systems. After basic training, opportunities exist to undertake further training as anything from a heavy vehicle driver, to a chef, vehicle mechanic, armourer, IT technician, combat engineer, emergency medical technician and many other roles.

Officer Cadetships
The Defence Forces are also looking to enlist Officer Cadets. A Cadet is a Military Officer in training. Officers are the leaders, decision makers and managers of the Defence Forces. They are the platoon commanders in our Army, the pilots in our Air Corps, and the navigators and engineers in our Naval Service. An Officer leads, directs and motivates our frontline troops. The role comes with very real mental and physical challenges, with Officers being expected to lead from the front in all situations. Officer Cadets engage in 15 months training in the Military College, Curragh Camp, Kildare, covering many basic and practical soldier skills and military fields of study before taking up an operational appointment in the Permanent Defence Forces. The Defence Forces is looking for people who have the potential to:

Can you do all of this while working in a high pressure, mentally and physically demanding and environment?

After completing Officer training, cadets are commissioned into a Service Corp — Infantry, Artillery, Cavalry, Supply & Transport or Communications Information Systems. As a young Officer many more opportunities for development, growth, variety and responsibility will come your way.

Applicants must be 18 years of age or over and under 26 years of age on the date mentioned in the notice for the current competition.

Technicians provide the maintenance and servicing of Air Corps aircraft, their engines, systems, equipment and weapons. The Air Corps is looking for young, enthusiastic and technically minded individuals who are looking for the opportunity not just to learn a new trade but also to practice it in challenging situations. Trainee Technicians undergo their academic training at the

Technical Training School, located in Casement Aerodrome, the home of the Air Corps. All Candidates must be 18 years of age and less than 23 years of age on the closing date for receipt of applications.

WHEN DO WE RECRUIT?
We normally recruit General Service Recruits all year round.

We advertise the Cadet Competition in January/February for induction in September. 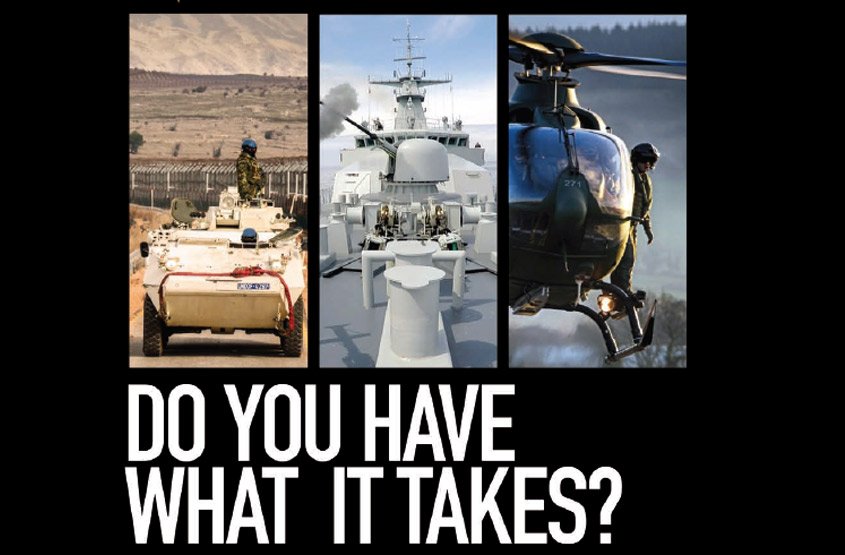 General Service Recruit
The training for General Service Recruits is initially for 15 weeks. The Recruit Training Syllabus is designed to produce a physically fit, disciplined and motivated Two Star Infantry Soldier with basic military skills. Recruit training is foundation military training. It is followed by 3 Star training and at a later stage by Trained Soldier Specialist Training courses.

Cadetships
Cadets train for a total of 15 months. The training is conducted in the Military College, Defence Forces Training Centre, Co. Kildare. The purpose of cadet training is to develop character and leadership skills and instil a sense of duty and responsibility in the cadet. To benefit from that training, which is conducted in an environment of strict discipline, the cadet needs mental acuity and physical agility. During training an Army Cadet masters basic military skills, such as rifle marksmanship, as well as developing the leadership skills required of an Army Officer. Air Corps and Naval Service Cadets also undertake leadership and foundation military training before specialising as pilots, navigators or engineers. On commissioning the new Officer takes up a leadership position in one of the Army Corps.

On successful completion of the first year of training, Naval Service cadets spend the second year of the cadetship studying for a degree at the National Maritime College of Ireland.

The Air Corps Technical Training School is EASA (European Aviation Safety Agency) approved and approved by DIT (Dublin Institute of Technology) to deliver the Bachelor of Engineering Technology Degree in Military Aviation Technology. Through these programmes the trainee technicians will be instructed in all disciplines of aircraft maintenance including fixed and rotary wing aircraft, power plant and avionics.

The EASA modules (Theory and Workshop Practical’s) and their associated examinations are completed entirely, prior to the trainees’ advancement through advanced access onto the Bachelor Engineering Technology Degree in Military Aviation Technology.