#ThinkLanguages gives TY students the opportunity to experience and understand how learning foreign languages can have a tangible, real-life impact socially, culturally and professionally.

In 2020, the team at Languages Connect reimagined the event and supported 70 schools nationwide to put on their own local #ThinkLanguages events in December. Nearly 5,000 TY students were involved in a festival of languages under the theme ‘Think Global, Act Local’.

Teams of TY students, TY coordinators and Modern Foreign Languages teachers brought foreign language learning to life in their school. The process of managing the event empowered the students to take ownership of languages in their school, to learn more about the languages their fellow students spoke and embrace the diversity in their local area. 70% of the students who took part discovered that other students had language skills they didn’t know about! 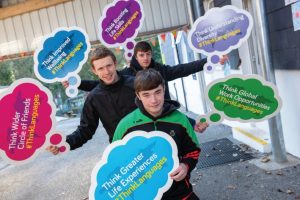 What happened in schools for #ThinkLanguages 2020?

Schools registered in September and with the support of Languages Connect, they formed a #ThinkLanguages Champion Team of TY students to help organise events in their own school. Languages Connect provided a streamed opening ceremony and pre-recorded language workshops, a full event management pack and ongoing supports to all registered schools. The celebrations happened nationwide on Monday 7th December and began with an opening address from Minister for Education Norma Foley TD, and inspiring talks from keynote speaker Des Bishop, Ruairí de Burca, Director General of Irish Aid, and Orlaith Tunney, Trinity College Careers Consultant. The students were offered the choice to take part in 14 engaging pre-recorded culture-themed language workshops and activities throughout the day. Workshops available ranged from Spanish Flamenco Dancing and Portuguese Capoeira to colourful beginner classes for Polish and Chinese. 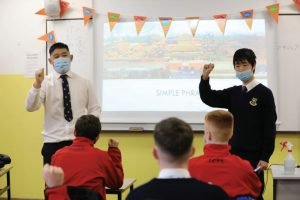 Schools were also encouraged to host their own language-based events locally – with some inviting local speakers (in person and by video call), past-pupils of the school or teachers/parents/friends in the local community to speak about their own experience of using different languages. Some schools put on International Christmas Fairs, students led their own heritage language classes, salsa classes, arts and crafts workshops and many more creative and interesting ideas.

The team at Coláiste an Phiarsaigh in Glanmire, Co Cork were chosen as the #ThinkLanguages Champion team 2020 – congrats to all involved for putting on such a wonderful event!

Overall, the new localised format of #ThinkLanguages was a great success and we’re already starting to plan for 2021. Save the date: Monday 22nd November 2021. Registration will open again in September, so keep an eye on Languages Connect social media for more details. 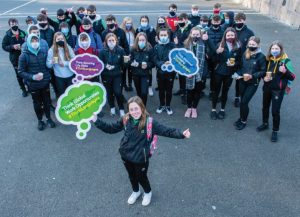 Languages Connect promotes the personal, social, professional and economic benefits of foreign language skills to principals, teachers, guidance counsellors, parents and students, and all stakeholders in the third-level sector. Funded by the Department of Education and facilitated by Post Primary Languages Ireland, as a key objective of the Languages Connect – Ireland’s for Foreign Languages in Education 2017 – 2026.